Switzerland is best known as a place of natural beauty and diverse landscapes, but it’s been hiding a secret. The food in Switzerland is a culmination of the melting pot of European cultures found in this tiny country. German, French, Austrian and Italian influences can be found in all Swiss food. It is a culinary and cultural mash-up of tradition and history and a delight not to be missed.

We’ve put together a list of some of our favorites that you must try when you next visit Switzerland.

The name of this delightful little treat translates literally to ‘delicious little thing from Basel’. We don’t know why this makes us smile so much. The name is as endearing as the food itself. Lackerli was invented by spice traders back in the seventeenth century and are made with dried fruits, cinnamon, honey and cloves.

These treats are sticky sweet, and spicy and can be enjoyed all year round, although they are more prevalent at Christmas and festival times. 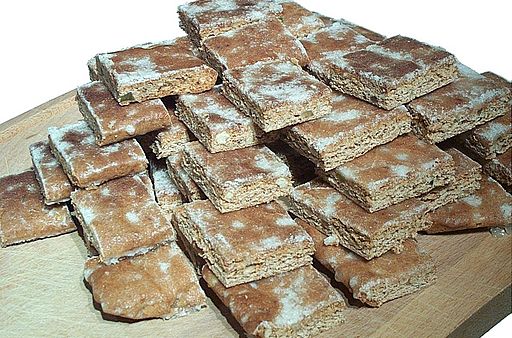 As the name suggests, this is another Basel born recipe. Mehlsuppe is a soup made of flour, butter, beef stock and Gruyere cheese. Basel Festival kicks off each year in February and March with a bowl of Mehlsuppe at 4 am. That’s why they refer to this dish as Swiss Carnival Soup.

The legend behind the making of the soup is that a chef left flour cooking too long and then tried to salvage it. Whether the recipe was accidental or not, this soup is heartwarming, delicious, and a must-try when you next visit Switzerland.

This one is so obvious we almost didn’t put it on our list. In the end, we decided that no list of food in Switzerland could be complete without the mention of chocolate. Zurich and Geneva have battled it out for centuries, competing in the chocolate wars. Pioneering chocolatiers invented confectionary techniques that are still in use today. Swiss chocolate is unlike any other.

Whether you are in the major cities or a hilltop chalet village, you will find a host of tempting treats designed to tantalise your tastebuds and lure you into the shops for more. You have to indulge in the chocolate in Switzerland, and the hot chocolate and the chocolate fondue. There is no room for a diet when visiting Switzerland.

The story behind this dish makes me smile almost as much as the tasty little thing from Basel. According to the history books, Fondue was born out of the need for farmers to make their often-stretched resources go further. In true Swiss community spirit, it is a dish that is to be shared with friends and neighbors.

The name Fondue means melted in French, and although it is a dish that you can find in France and Italy, its origins are in eighteenth-century Switzerland. It is made with melted cheese, wine and garlic and is eaten by dipping bread, pickles and vegetables into the sauce with a long fork.

History also states that there is a penalty to be paid for dropping your bread in the sauce. Be careful when out eating this with friends. You could end up with a bill to pay at the end of the meal.

The Swiss do love their cheese, and Raclette is no exception. This is a dish made from local cow’s milk and melted over a flame and cut into slices or poured over potatoes, meats and pickles.

Raclette is a social meal usually eaten with friends, family and neighbors and is most popular in the wintertime. The comforting smell of the flame melted cheese wafts out of restaurants and hillside valleys during the colder months.

Like hash browns, this iconic Swiss dish is made up of grated potatoes fried in butter until golden and crisp. This delicious little potato patty is served with many meals at any time of the day and is available year-round. It is a staple of the Swiss diet and goes with everything.

To level up your Rosti experience, we recommend trying a Rosti Valaisanne. This is a whole new level of culinary delight. Rosti Valaisanne comes from the Canton of Valais and is topped with bacon, a fried egg, raclette cheese, and pickles or gherkin.

This hearty stew is typically served up in the wintertime to stave off the cold. The dish originates in the Ticino Canton, the Italian/Swiss region. As you would expect from an Italian/ Swiss cuisine, the two melt together beautifully to champion this heavyweight dish.

This hearty beef Swiss stew is traditionally served over polenta. Originally stewed in a copper cauldron, the meal was enjoyed during the colder months.

This stew first appeared in cookbooks in 1947 and is another hearty stew. The Zurich born recipe is made of stewed veal cooked in white wine, cream and stock and served with a potato rosti. There are many variations and combinations of the original recipe.

Recently there is a recipe for Zurcher geschnetzeltes where meet was replaced with soy cubes. We don’t know how well it is accepted among general population 😊 The original recipe is best found in Zurich, naturally.

As well as taking its inspiration for food from the adjoining countries, Switzerland’s recipes are also derived from the countries long agricultural history. Famous for dairy cows which you will see grazing freely on every gondola ride you take, Switzerland is big on yoghurt.

Their offering of yoghurts has much more choice than you may be used to in your home country. The choice is endless, from thick ten percent fat yoghurts to those laced with rich dark chocolate and sweet pear, and can satisfy pickiest of the tastebuds.

Switzerland offers so much beauty and diversity in its landscape, and the food in Switzerland on offer is equally breathtaking. The traditional dishes that can only be found here are an amalgamation of the surrounding countries traditions and the Swiss history of agriculture and farming. The produce is local and fresh, and the meals come with a tasty twist.

Last Updated on May 14, 2021 by Admin @ gotravelyourself.com

We use cookies on our website to give you the most relevant experience by remembering your preferences and repeat visits. By clicking “Accept All”, you consent to the use of ALL the cookies. However, you may visit "Cookie Settings" to provide a controlled consent.
Cookie SettingsAccept All
Manage consent

This website uses cookies to improve your experience while you navigate through the website. Out of these, the cookies that are categorized as necessary are stored on your browser as they are essential for the working of basic functionalities of the website. We also use third-party cookies that help us analyze and understand how you use this website. These cookies will be stored in your browser only with your consent. You also have the option to opt out of these options. But opting out may affect your browsing experience.
Necessary Always Enabled
Necessary cookies are absolutely essential for the website to function properly. These cookies ensure basic functionalities and security features of the website, anonymously.
Functional
Functional cookies help to perform certain functionalities like sharing the content of the website on social media platforms, collect feedbacks, and other third-party features.
Performance
Performance cookies are used to understand and analyze the key performance indexes of the website which helps in delivering a better user experience for the visitors.
Analytics
Analytical cookies are used to understand how visitors interact with the website. These cookies help provide information on metrics the number of visitors, bounce rate, traffic source, etc.
Advertisement
Advertisement cookies are used to provide visitors with relevant ads and marketing campaigns. These cookies track visitors across websites and collect information to provide customized ads.
Others
Other uncategorized cookies are those that are being analyzed and have not been classified into a category as yet.
SAVE & ACCEPT