Austria is a Central European country with stunning nature, rich history and amazing cultural heritage. Mozart, Schubert, Strauss, are notable few of famous composers born in Austria, and are just a small part of vast number of masters of their art. World famous painters, Klimt, Kokoschka and Schiele were also from Austria, and list goes on.
Most populous cities are Vienna (the capital), Graz, Linz, Salzburg and Innsbruck and there are numerous mountain villages scattered throughout breathtaking mountain landscapes.

In the west, there are famous ski resorts of Alpbach, Ischgl and Kitzbühel that offer skiing experience for skiers of varied skills, coming regularly from all around the world.

Austria is located in Central Europe and it shares its borders with eight countries: Czech Republic, Hungary, Slovakia, Slovenia, Liechtenstein, Germany, Italy and Switzerland. It`s a small country – based on its size, Austria is 113rd country in the world and 20th in Europe..

As with many countries, your passport must be valid for at least three months after you complete visit to Austria, so please plan ahead. Austria is part of Schengen agreement and visa for any of the countries from the Schengen group is also valid for Austria. List of countries requiring visa can be found here.

Getting to Austria is the best via Vienna Airport (VIE) or other, smaller airports: Salzburg (SZG), Innsbruck (INN) or Graz (GRZ) or via train, bus or car from neighboring country. If you have plenty of time, then driving throughout any of the scenic routes is the best choice.

Depending on where you want to go in Austria, your options for accommodation vary from standard hotels or AirBnB to rustic chalets in Alps.
It is up to you and your budget and personal preferences. For budget (and young) travelers, there are plenty of cheap accommodation to choose from selection of hostels.
For latest offers on hotels from our providers use search form below:

Austria has very efficient and reliable public transport. Trains, underground and buses run smoothly and are very affordable. You can also rent a bicycle to ride around cities along designated lines or rent a car if you prefer to move around faster (although, parking in cities can be quite expensive).
For traveling between cities, you can even fly between local airports, although flights are very short and might be expensive since distances can be reached quickly by trains and buses.
Again, depending on your budget and your travel needs, you can chose the option most suitable for you.
Here is public transport authority info for Vienna.

More info about moving around in Austria.

Austria has great food, it`s a part of central European cuisine and definitely inherited from Austro-Hungarian Empire, where many influences were embedded into variety of recipes.

The top dish is of course, Wiener Schnitzel, breaded weal steak (although there are variations with chicken or pork), world known, and especially popular in Germany as well. Knödel, or dumplings is another famous Austrian food, which comes in different flavors, savory or sweet. Savory ones are made from potatoes or bread and sweet ones have fruit added.

Tafelspitz, beef boiled in a broth made of mixed vegetables is often served with dumplings made this short list of Austrian food as well. Brettljause is simply a ‘snack` served on a wooden board (or a cutting board) and can consist of meat cold cuts, cheese, pickled vegetables, served also with bread (hence the ‘snack`).

From sweet part of Austrian menu, let us not forget Apple Strudel, apple pastry originating from all the way from 17th century and remained popular sweet delicacy until now. There are many more sweet stuff to be found in Austria, such as Sachertorte and Esterhazy-Schnitte, both delicious and rich in flavor cakes.

How safe is Austria for tourists and to move around? Austria is very safe; it is ranked as number 3 to 5 on the world safest country list (on various indexes). Tourist areas are generally safe, both for single tourists and groups or families, but extra caution for pickpocketers is advised.
More details about safety in Austria you can find here.

Austria is not that costly for tourists, and you can always find great deals on accommodation, meals and attraction tickets. For detailed pricing information for various items, click here.
Prices throughout Austria are almost the same, with slight variation, but Vienna is most expensive for general tourism. Same places in exclusive ski resorts can be very costly, but these exclusive areas always come with a price.

Austria has continental climate, with winter temperatures going down to -22 C (-8 F) and with summer to up to 35 C (95 F). Rain and snow are very common during autumn and winter.
More info about weather in Austria.

Austria can be year around destination for any traveler as there is so much to see and do, but most popular times are April to October to the main cities, including capital Vienna and January to March for visiting ski resorts during snow season.
There are many festivals and Christmas markets in December, so count this as another good time to visit.
More info on when is the best time to go to Austria.

Austria is part of the European Union and Euro zone and official currency is Euro. You should always pay attention when paying bills if you are coming from non-Euro countries and mind the exchange rate. (Xe.com). Major credit cards are accepted almost everywhere, but please do check card charges from your bank in foreign countries before the trip. It is always good to have some cash on you, especially when leaving a tip in the restaurant or for taxi ride.

There are ATMs and banks on every corner and cash withdrawals are in Euros with a fee. Major banks don`t charge ATM fees to foreigners, but privately operated ATMs may sometimes charge high fees. However, machine should warn you about the charge so you have a choice to cancel the transaction before committing to it.
More info about banks, ATMs and charges.

Austria is small country but filled with attractions and spectacular nature, so we will list here only top popular ones: 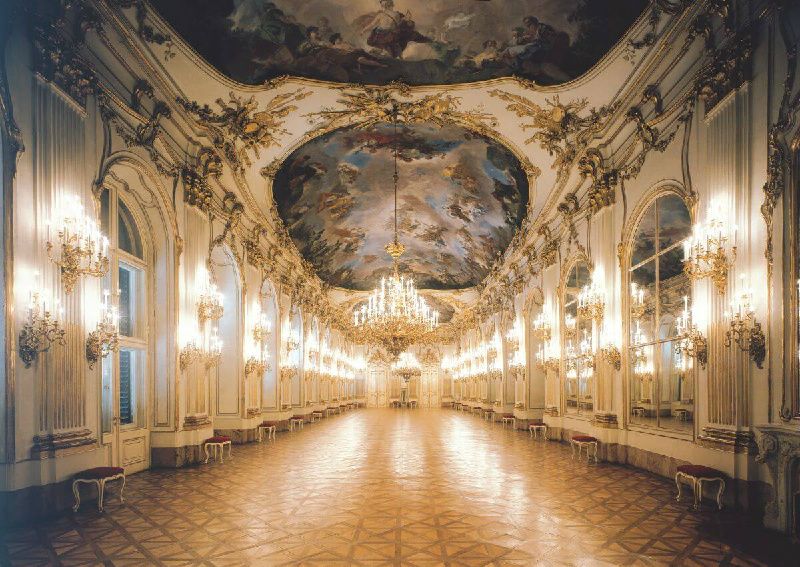 Belvedere. A historic building complex in Vienna, consisting of two baroque styled palaces, the Orangery, and the Palace Stables. Famous also for world`s largest collection of Gustav Klimt’s paintings, including the Kiss.

Salzkammergut. A region of lakes and Alpine ranges near Salzburg. It also famous resort area.

St. Stephen’s Cathedral. Also known as Stephansdom, is a medieval Roman Catholic church in Vienna. A place of worship with catacombs and a treasury museum.

Hohensalzburg Fortress. Iconic landmark of Salzburg, this 11th century fortress on a city hilltop is the largest preserved castle in Central Europe. It has beautiful views of the city and Alps and a museum.

Vienna State Opera. World-famous opera house with largest repertoire and major productions. Considered as one of the most important opera houses in the word. Guided tours and museum available. 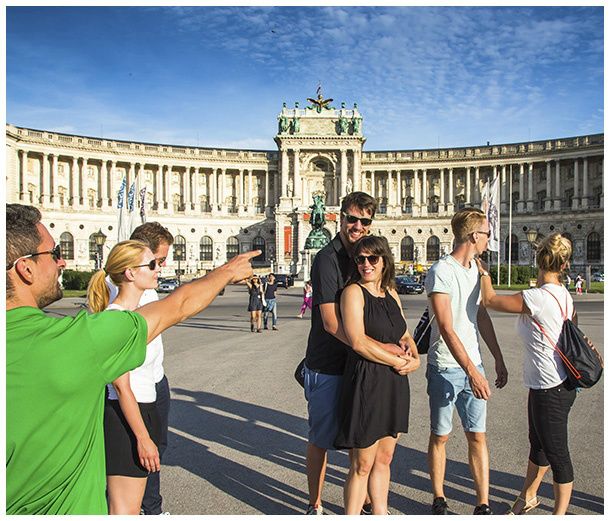 Mirabell Palace. A 17th century palace with gardens in Salzburg. Listed as UNESCO World Heritage Site as a part of the old town.

Kunsthistorisches Museum. Fine arts history museum in a palace. Decorated with lavish interiors and it is crowned with an octagonal dome. It hosts Habsburgs art collections and antiquities.

Tiergarten Schönbrunn. Also known as Vienna Zoo; this zoo is located on the grounds of the Schönbrunn Palace. It is a home for about 500 species of animals, including giant pandas, Siberian tigers and elephants.

Melk Abbey. A Benedictine abbey above the town of Melk in Lower Austria. Sitting on a rocky outcrop overlooking the Danube River.

Hoher Dachstein. Glacial Alpine mountain, the second highest in Northern Limestone Alps. Skiing and snowboarding destination and it is great for visit both n summer and winter.

Museumsquartier. Restored Baroque district filled with museums in both modern and historic buildings. Located in the 7th district of Vienna. 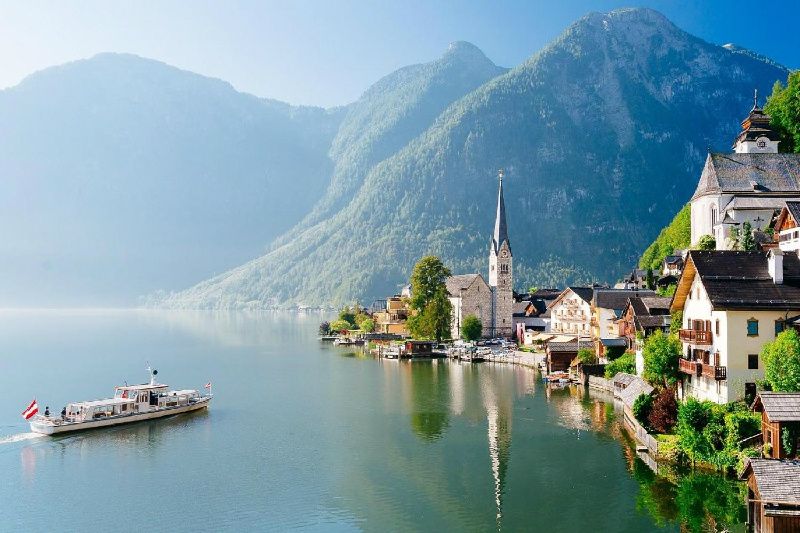 Krimml Waterfalls. Mountain waterfalls, located near the village of Krimml in the High Tauern National Park (Salzburg state). Located in heavily forested area these waterfalls are the highest in Europe, with 380m high fall.

Zillertal. A valley in Tyrol, offering skiing and other winter sports, as well as biking, hiking or golfing. Named after Ziller river and Zillertal Alps, heavily glaciated section of Alps.

Albertina. Art museum housed in Habsburg palace, featuring largest graphical collection in the world, including Dürer’s “Hare” and Klimt’s studies of women. About 65,000 drawings and one million of old masters` prints are housed there. 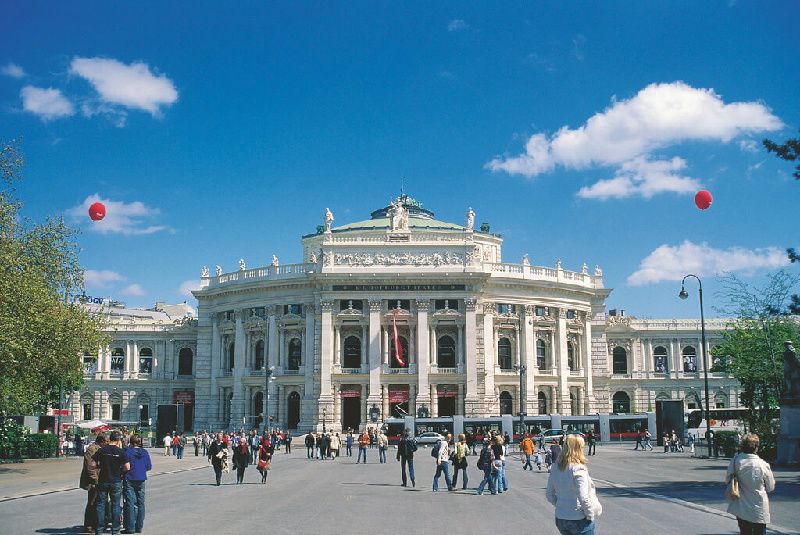 Wörthersee. Popular recreation destination in summer for water sports, swimming and boating, this lake in southern Austria is famous for its blue-green water.

Goldenes Dachl. Also known as Golden Roof, this iconic landmark is located in old town of Innsbruck. This Habsburg residence is decorated by 2657 shiny tiles and it is now a museum featuring Innsbruck history.

Salzburg Cathedral. Domed marble 17th century cathedral and museum in Salzburg. Among many other historical artefacts, it is also known for Mozart`s baptism in 1756.

Getreidegasse. Famous busy shopping street in the historic Altstadt of Salzburg, Austria, named the UNESCO World Heritage Site since 1996. Well known for the birthplace of Wolfgang Amadeus Mozart at No. 9. He lived there until age of seventeen. 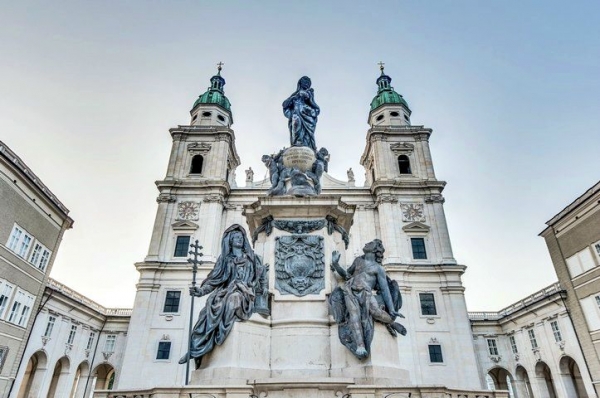 Innere Stadt. The central 1st district of Vienna, also known as old town, encircled by the Ringstrasse Boulevard. Many historic landmarks are located there, including St. Stephen`s Cathedral on a Stephansplatz square.

Stephansplatz. Famous square in Vienna, located in old town at the geographical centre of the city. It is named after St. Stephan Cathedral or Stephansdom, one of the tallest churches in the world. Stubaital. An alpine valley in Tyrol and the central valley of the Stubai Alps. Featuring Sights, museums, amusement parks or untouched nature, including Ruetz river flowing through the valley.

Eisriesenwelt. Natural lime stone and ice cave with stalagmites, discovered in 19th century. It is open during summer to the public with guided tours.

Austrian Parliament Building. Built in second half of 19th century, this monumental building hosts now two houses of Austrian parliament and it is rich in architectural features and artistic details. Guided tours are available through visitors’ centre.

The Austrian flag is one of the oldest national flag in the world. It dates from 1191, when Duke Leopold V fought in the Battle of Acre during the Third Crusade.

The father of psychoanalysis, Sigmund Freud, was Austrian.

The town of Hallstatt, Austria is so loved by Chinese tourists, they built a replica in China.

We hope you enjoyed reading about Austria!

Offers for trips, hotels and flights to Austria.